No country stands for a premium car experience more than Germany. The country’s auto industry is as famous as its autobahns designed for remarkable speed and efficiency.

Yet drivers of EVs know that the EV driving experience does not yet match the premium nature of a petrol car in Germany. A country known for its cumbersome bureaucracy and contemporary infrastructure boondoggles, Germany’s infrastructure projects in the 21st century have not caught up to the efficiency of its private-sector engineering. 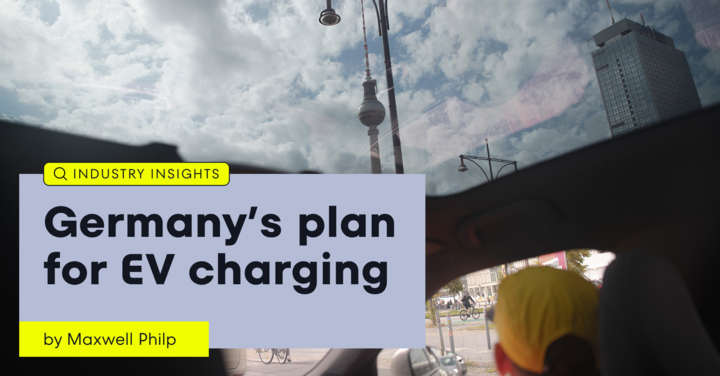 No one knows the EV driver better than the companies—charge point operators (CPOs), carmakers, and emobility providers (EMPs)—building the products and services that drivers rely upon. Charge point operators and EV drivers alike will be happy to hear that the Masterplan II minimizes the time and cost for infrastructure roll-out.

The latest blueprint for charging infrastructure reworks the original from 2019 to take a more market-oriented approach. The industry is in the drivers seat, with country-wide standard processes and municipal planners moderating the process. In true social fashion, the state will subsidize development in underserved areas in order to ensure there are no gaps in the national charge point network.

Germany’s existing legal framework has created many hurdles for the emobility industry seeking to expand the availability of charge points for EV drivers. The blueprint contains many measures that will streamline the planning of grid connections, construction of charge points, and provision of energy to drivers.

Previously regional procedures for planning and approval, grid connections, and digitalization will become uniform across the country, however regional governments and cities will take full responsibility for planning and implementing the roll-out of charge points in their jurisdictions. The Digital and Transport Ministry employs creative strategies, such as pushing for the development of infrastructure on federal lands and public parking lots, to install chargers without extra bureaucratic delay.

Germany’s planning will also be fully digitized. A new tool called StandortTool 2.0 will help planners see critical intersections between existing charging capacity, current usage, and future demand from drivers. The software will visually display, for example, where apartment dwellers are expected to purchase EVs and highlight the projected demand for street side AC chargers as a result.

The new Masterplan also recognizes that charge point operators can take many forms. Regulators will develop a new framework so private individuals or businesses can make charge points available for public use without facing the regulatory constraints of an energy provider. The petrol industry is also encouraged, though not required, to install fast chargers in 75% of their fuel stations by the end of the decade.

Data is at the heart of a digital economy, and EV drivers rely upon accurate, dynamic data to determine when and where they will be able to charge their car. It’s of the utmost importance in order to increase the competitiveness of electric cars. The Masterplan II will take the standards that will come through the European Union’s Alternative Fuels and Infrastructure Regulation (AFIR) next year and build upon them. AFIR will determine the who, what, when, and where of the data that must be made available for all members of the digital EV ecosystem.

Germany’s liberal coalition understands the digital nature of charging infrastructure and brings this to the front and center of its driver-facing strategy. Germany will build upon AFIR’s data framework and ensure CPOs make operating status, charge point availability, and pricing information available free of charge to the parties who will ultimately display this data to drivers, usually EMPs and carmakers. EMPs will be held responsible for passing on this data through regulation.

Many drivers purchase an EV with the environment in mind. Within the new framework, drivers will be able to charge publicly with electricity accredited as green. CPOs who install renewable power generators on-site can receive this accreditation while also taking energy from the grid.

Perhaps more interesting is a framework to further fold charging infrastructure, and electric vehicles, into the energy grid. Masterplan II sets out a series of measures that streamline the communication, information flows, and formalities between power authorities, grid operators, and charge point operators so that charge points are built where drivers need them. The framework looks to the future.

Germany’s liberal coalition also opens the dialogue for bidirectional charging, where EVs themselves could be considered a part of the grid and help support the grid’s capacity by storing renewable energy when it’s produced for use at times such as “Dunkelflaute,” days where the wind doesn’t blow and the sun doesn’t shine. This is a foreword-thinking approach that understands how emobility and the power grid are interconnected in a digital economy, setting the stage for discussions and experimentation to take place over the next decade.

Opponents of bidirectional charging point to individualist culture as a hurdle for its uptake. Yet this misses the full picture. Many battery-powered vehicles will be part of large fleets not owned by private individuals. Heavy duty vehicles will also be a part of the mix. Germany should also look at how to commercialize bidirectional charging and create a new market. Software would of course moderate the energy distribution in the background to ensure no vehicle was left empty by its intended use.

The Masterplan II isn’t perfect. Critics point out that the reliance on cities and regional governments for the implementation may result in regional monopolies of charge point operators. Strict requirements for private investment are also not mandated through the Masterplan. The language of the report essentially realigns German bureaucracy toward creating state-brokered business deals.

Yet a country used to stability needs some set of stable institutions to help moderate an inherently disruptive industry. And the Masterplan II comes at a time when Germany needs dramatic investment in a future digital economy based in sustainability. Most importantly, the governing coalition addresses the most pressing needs of drivers and and the emobility industry alike. The measures laid out in the Masterplan II are an investment in Germany’s future digital economy and mobility of its citizens.

EV drivers will benefit massively from the streamlining and provision of data. Gone be the days of arriving to find a malfunctioning charger, and Germany’s blossoming emobility industry gets a kick-start through the use of digital tools for forecasting and planning as well as the connections created between grid and charge point operators.

Read all the case studies